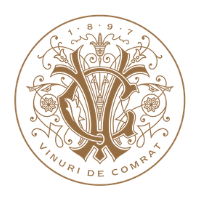 Comrat Wines - is the oldest winery located in the southern part of Moldova, in the autonomous region "Gagauzia", ​​with its capital in the city Comrat. Comrat is famous for its people - Gagauz, a small Turkic ethnic group. Gagauz are Eastern Orthodox Christians and speak Gagauz, a Turkic language, that is included in the UNESCO list of endangered languages, with less than 180,000 speakers. This is a region with unique traditions at the intersection of Eastern Europe, which offers authentic gastronomic experiences and oriental hospitality.

Vinuri de Comrat, is one of the oldest historical-architectural and industrial monuments of the 19th century in the Republic of Moldova. When visiting the wine complex "Vinuri de Comrat" you have the unique opportunity to learn about the history, traditions, culture of the Gagauz people, as well as about the wines from the region. The wine from Gagauzia has a special taste and aroma, which carries the energy of the generous sun from the South.

The territory of the wine estate is a real flower garden. The restaurant, called 1895, is open all year round, and here you have the opportunity to taste dishes from the Gagauz national cuisine: shurpa (Gagauz national soup with greens and lamb), skewers prepared in tandar with grilled vegetables, famous gozleme (gagauz pies), cheegeary, bulgur, kavurma. In fine weather, you can dine in one of the gazebos near the fountain.

Guests of the winery can take photos in traditional Gagauz clothes. Also, on the territory of the winery you can visit the museum that keeps household objects and production equipment from the Soviet times. For larger groups and with prior reservations can be organized live performances of local ethno-folk bands, bike rides, retro-disco parties.

The displayed prices do not include transport to the winery, which can be arranged upon request for an extra charge.

For more than 120 years, winemakers from Comrat keep and pass down from generation to generation the classic traditions of producing unique wines from southern Moldova. The company "Vinuri de Comrat" was founded in 1895, by decree of the Minister of Finance S.I.Witte of the Russian Empire and has undergone many transformations throughout its history. In 1995 it was privatized and today it is a modern enterprise, which processes 5-6 thousand tons of grapes and bottles about 3 million bottles of wine every year. The company owns over 300 hectares of vines and 5 agricultural holdings located in the "Valul lui Traian" wine region. It produces more than 50 series of wines, from European and local grape varieties, the wine being exported in over 20 countries. Comrat wines are highly appreciated at various international wine competitions, so in the last 2 years, they have received over 70 gold and silver medals.

* Opening hours: only for organised groups

Amenities and other services

includes a guided winery tour, no wine tasting. Tours run daily at 12.00. ***The indicated price is per person. Min 5 people in group

includes a guided winery tour, a tasting of 5 types of wine, crackers. Tours run daily at 12.00. ***The indicated price is per person. Min 5 people in group

includes a guided winery tour, a tasting of 6 types of wine. The offer includes also a lunch with 3 traditional meals from gagauz cuisine. Tours run daily at 12.00. ***The indicated price is per person. Min 5 people in group

includes a guided winery tour, a tasting of 6 types of wine. The offer includes also a lunch with 6 traditional meals from gagauz cuisine and a dessert. Tours run daily at 12.00. ***The indicated price is per person. Min 5 people in group

Request successfully sent. Filling in the form is not considered a confirmed reservation. You will be soon contacted for details. Thank you.

Got it
Important details regarding your booking

The booking of services in the portal is not considered immediately confirmed, is subject to availability. You will receive an email with the booking details and later on (within 48 hours) you will informed about your booking status (confirmation or non-confirmation) within 24 hrs. If you have not received an email from us in due time, please check spam folder or contact us at +373 79555633 (Mon-Fri 09:00-17:00).

VAT at the legal rate included; additional purchases/orders on-site have to be paid separately.

The full amount of your booking will be charged to your credit/debit card only after the confirmation of availability of the partner(s).

Cancellations less than 24 hrs prior the experience / check-in date or no shows will be charged with a 50-100% cancellation fee, depending on the type of services.

50-100% no-show fee will be charged, depending on the type of services.

Continue browsing
Write us a message

Leave your message in the form below, and we will get back to you shortly by email.

Thank you for your message. Soon we’ll get in touch with you.